The definitive 2018 report No Water, No Growth by Hong-Kong based non-profit China Water Risk shows the critical dependence of communities in the Hindu Kush Himalaya (HKH) on the region’s limited water sources. It suggests that the governments in the region chart a roadmap towards growth that requires less water and generates less pollution. This vision of growth, however, is impeded by a plethora of threats to the environment and communities in the HKH, such as rising temperatures, declining cryospheric resources, and unpredictable rainfall to increasing water stress in the upper regions of the HKH.

In a bid to address these very regional issues, provide solutions to policy and decision makers, and further encourage collaborative efforts on research and knowledge sharing, the Upper Indus Basin Network (UIBN) was established in 2014. It is spearheaded by the Indus Basin Initiative at the International Centre for Integrated Mountain Development (ICIMOD). The UIBN’s country chapters –Afghanistan, China, India, and Pakistan – were established soon after and are essential to the UIBN’s operations, which are focused on research as well as fostering transboundary and transdisciplinary collaboration in the Indus River basin.

The inception workshop for the UIBN – India Chapter (UIBN–IC) was co-organized by ICIMOD and Jawaharlal Nehru University in New Delhi on 19 April 2019. The event saw representatives from government and research organizations participate in day-long discussions. Their inputs will be used to define the objectives of the six technical working groups that constitute the country chapter. The workshop was divided into two halves: the first half involved participants introducing key research areas on topics such as modelling of climate extremes, glacier monitoring, and pollution stress being faced by water bodies; the second half involved the various technical working groups discussing their future work plans.

The participants’ presentations highlighted the need to address data gaps that currently exist in research on the basin. These data gaps are compounded by limitations in the research approach as well as the quality of available data. For example, one research observed that the general circulation models being used to observe precipitation over the Indus basin are at a coarse resolution. In this case, a downscaling tool could be used to capture refined regional images of precipitation trends. Not limiting research activities to purely technical areas, the workshop discussions also emphasized that research areas should be more interdisciplinary in nature – covering socioeconomic and gender aspects as well.

As noted by representatives from Australian Aid and the Swiss Agency for Development and Cooperation, the UIBN can only succeed if sound scientific evidence on present conditions is produced. The UIBN–IC is an effort to bring timely and coordinated solutions to those who are most vulnerable to climate variability and change. The effort, although local in its research focus, has a transboundary scope and has the potential to improve the lives of the 215 million people who are dependent on the Indus basin’s ecosystem services, contributing to building a resilient HKH region.

Significant contributions in drafting and presenting ‘Hydropower Environmental Impact Assessment Guidelines (HP-EIA) of Nepal’ to the Government of Nepal (GoN) ... 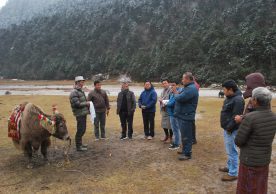 Nepal, India, and Bhutan – which share the transboundary Kangchenjunga landscape in the eastern Himalaya – have been connected through ...

Rural communities in the Kailash Sacred Landscape (KSL)-India have a rich tradition of beekeeping with the indigenous honeybee, Apis cerana. Over ...

Findings from a recent study show that the larger glaciers in the Hindu Kush region of ...