Scientists assess wetland ecosystems services on top of the world

In August 2015, a team consisting of experts from China’s Yunnan Institute of Environmental Sciences and ICIMOD carried out a two-week long field survey in Nylam, Tingri, and Tingkey counties of the Tibet Autonomous Region (TAR), where the upstream section of the Koshi River and its tributaries run through. The goal of the survey was to get a baseline understanding of the current status of the area’s freshwater ecosystems, in particular wetlands, and how local communities have been interacting with these ecosystems on both economic and social levels.

Across the Hindu-Kush Himalayas, freshwater ecosystems such as ponds, rivers, and wetlands provide an array of services that are beneficial to livelihoods, economic development, and the natural environment. These services include freshwater supply, water purification, food production, water flow regulation, erosion control, carbon sequestration, climate regulation, flood regulation, and biodiversity. Yet freshwater ecosystems in the Koshi basin are increasingly at risk due to anthropogenic changes such as population growth, urbanisation, and encroachment, as well as other factors such as climate change. Threats to future freshwater supplies are a growing concern. 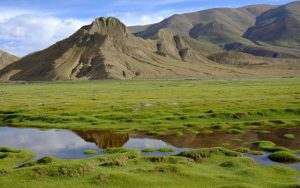 The research was a part of ICIMOD’s Australian Aid-funded Koshi Basin Programme, which emphasises transboundary cooperation on issues around river basin management. Except for the second National Survey of Wetland Resources conducted by the Government of China in 2010 – a survey that the public has limited access to – little information has been readily available on this evolving ecosystem, particularly from a socioecological perspective.

The survey received positive support from the Management Bureau of the Qomolangma National Nature Preserve, which helped to coordinate local government line agencies to facilitate the research. In conducting the survey, the research team divided into two groups: one group focused on the three counties’ freshwater biodiversity, and the second group focused on the communities’ socio-economic relationship with the surrounding wetland ecosystem. The team conducted interviews in each county with community members, as well as with local government officials, including officials from the bureaus of Forestry, Water Resources, Environmental Protection, and Agriculture and Animal Husbandry.

The research examined the effectiveness of environmentally-conscious government policies and incentive schemes, which were started in 2010. These schemes included the establishment of a network of grassland and wildlife monitors from nearby villages, as well as the erection of billboards in the counties that promote wetland protection and conservation in village rules and regulation.

The initial results of the survey suggested that these policies have positively benefited the wetlands’ ecosystem — researchers found that overgrazing and environmental destruction, which were once predominant in the region, are increasingly under control. According to local statistics, the number of livestock in and near the wetlands was reduced by 30%. In addition, in the wetlands near the town of Gangga and Dengmotso Lake in Tingri county, and the town of Jiangga in Tingkey county, a large number of fish and bird species were identified, including Triplophysa, Black-necked crane, Bar-headed goose, and Tadorna ferruginea. The researchers found that the wetlands served as a key biodiversity habitat for migrant birds during their breeding period.

The team plans to use the results of the survey in a larger analysis on freshwater ecosystem services and the associated policy impacts. More broadly, ICIMOD and the Koshi Basin Programme hopes that this pioneering study on freshwater ecosystems will contribute to wider  discussions on the relationships between humans and their environment, as well as upstream and downstream linkages in the future.

On 19 and 20 May, a team from ICIMOD visited four northern VDCs of Sindhuli District - Baseshwor, Bhimeshwor, Jalkanya, ...

A training on web development and content management was organized for four representatives of the National Environmental Protection Agency (NEPA ...

But things are changing. The Sixth Assessment Report (AR6) of the Intergovernmental Panel on Climate Change (IPCC) will feature a ...

Experts from the International Centre for Integrated Mountain Development (ICIMOD) and the Government of Nepal came together to brainstorm on ...