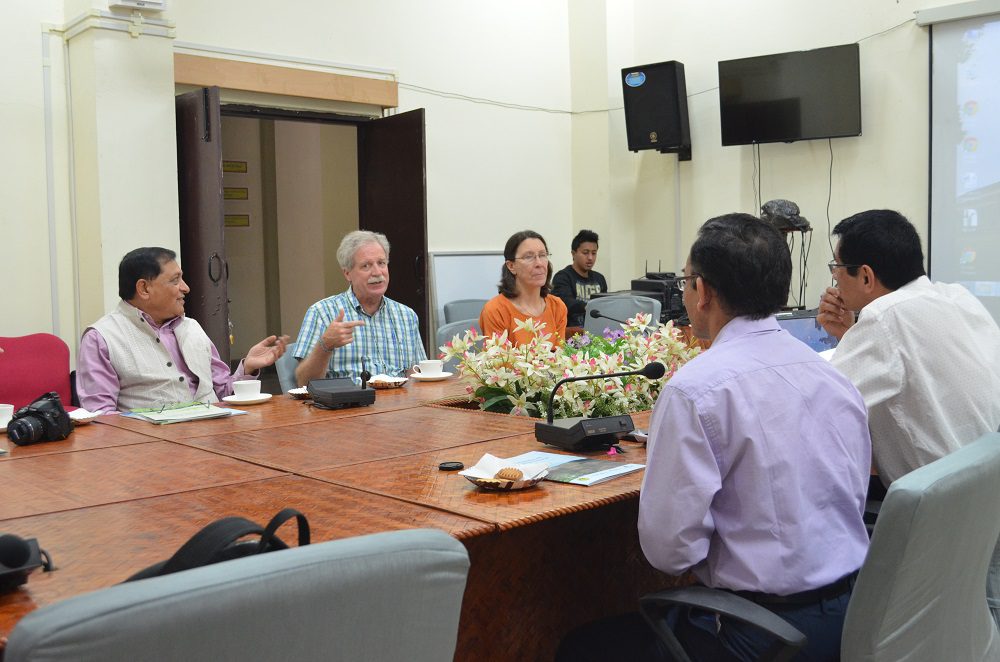 Mizoram’s forest cover is the highest of any state in India but it is severely degraded. The International Centre for Integrated Mountain Development (ICIMOD) is working to build capacity on reducing emissions from deforestation and forest degradation (REDD+) in the Indian Himalayan state. ICIMOD’s regional REDD+ initiative is working in collaboration with the Advanced Research Centre for Bamboo and Rattan (ARCBR) of the Indian Council of Forestry Research and Education (ICFRE) and the State Department of Environment, Forests and Climate Change in Mizoram.

ICIMOD’s Director General David Molden and Deputy Director General Eklabya Sharma are currently in Aizwal, Mizoram, to observe ongoing ARCBR research activities. ICIMOD and ICFRE are collaboratively implementing the REDD+ Himalaya Project in the state of Mizoram. Molden and Sharma are also observing the progress of activities carried through this project during their visit.

Addressing a gathering in Aizwal on 13 March 2018, Molden said that ICIMOD is working to develop an economically and environmentally sound mountain ecosystem to improve the living standards of mountain people and to sustain vital ecosystem services for the billions of people living downstream, now and for the future.

The REDD+ Himalaya Project has been conducting capacity building programmes on the role of forest conservation on climate change mitigation and initiating several income generating activities for local community members. Turmeric farming, for instance, is considered a viable income source for forest-dependent farmers in Mizoram, India. The REDD+ Himalaya Project installed a solar turmeric dryer in the village of Reiek in 2017 and will install a turmeric processing unit in another village, Ailawng, in 2018. It is also helping to establish shaded coffee demonstration plots in community forest land in both Reiek and Ailawng. These actions will help local communities generate income and in turn reduce pressure on forests.

On 13 March 2018, Molden and Sharma launched three publications brought out by ICFRE under this project. Drivers of Deforestation and Forest Degradation in Mizoram; Training Manual on REDD+ Measurement, Reporting and Verification; and Proceedings of the Regional Stakeholder Consultation and Capacity Building Workshop on National REDD+ Strategy and Safeguard Information System.

At the book launch, MZ Singson, Head of ARCBR, provided an overview of the research activities being carried out by the centre on bamboo, rattan, and another species. RS Rawat, Scientist-D, Biodiversity and Climate Change Division, ICFRE shared details of the progress made so far under the REDD+ Himalaya Project.

The ICIMOD delegation pointed out the need for piloting and scaling up best practices to promote bamboo-based agroforestry and forest-based income generation activities in North East India. They said that this could also provide an opportunity for improving the livelihoods of local communities. Woody bamboos grow rapidly, and have rapid biomass accumulation and effective carbon dioxide fixation. Its high sequestration capacity means that bamboo has high biomass carbon storage. Items made from this plant can be carbon neutral or even carbon negative over their life cycles. Additionally, bamboo-based agroforestry can also help generate income for locals.

Molden said that REDD+ programmes, if implemented properly with active community participation, have great potential for improving the livelihoods of forest dependent communities. He said that the programmes could also provide climate change mitigation options. “Local communities, which have traditionally conserved their forests, may financially benefit from REDD+ projects in terms of payment for environmental services,” he added.

Sharma suggested that ARCBR develop some project on bamboo and rattan in collaboration with the International Network for Bamboo and Rattan (INBAR). He added that ARCBR also develop ecologically suitable, economically viable, and socially acceptable models for addressing issues of shifting cultivation and the livelihoods of local communities in Mizoram.

Molden and Sharma are on a two-day visit to observe the progress of REDD+ activities in the state of Mizoram, India. They will be visiting REDD+ project sites (the villages of Ailawng and Reiek in Mamit district of Mizoram) to observe ongoing project activities and interact with the local communities.

ICIMOD’s Regional REDD+ Initiative is funded by the German Federal Ministry for the Environment, Nature Conservation, Building and Nuclear Safety (BMUB), and the Norwegian Ministry of Foreign Affairs. The Deutsche Gesellschaft für Internationale Zusammenarbeit (GIZ) GmbH is the technical partner of the REDD+ Himalaya programme.

Directors and representatives of all members Association of International Research and Development Centers for Agriculture (AIRCA) gathered on ...

The Transboundary Landscape Programme facilitates cooperation based on shared ecosystems between countries and has fostered partnerships with over 55 government ...

Hands on Training on Herbal Gardening for Teachers of Bhutan

ICIMOD, in collaboration with CoRRB, began promoting herbal gardens in Bhutan’s schools in 2012. Children plant medicinal herbs in their ...