Under the European Union-funded Support to Rural Livelihoods and Climate Change Adaptation in the Himalaya (Himalica) initiative, the International Centre for Integrated Mountain Development (ICIMOD) partnered with the Bandarban Hill District Council (BHDC) to train selected lead farmers on modern beekeeping practices in Ruma upazila from 29 October to 3 November 2017. Following training, four out of five participants from Bethel para and three out of five participants from Munlai para took up modern beekeeping. 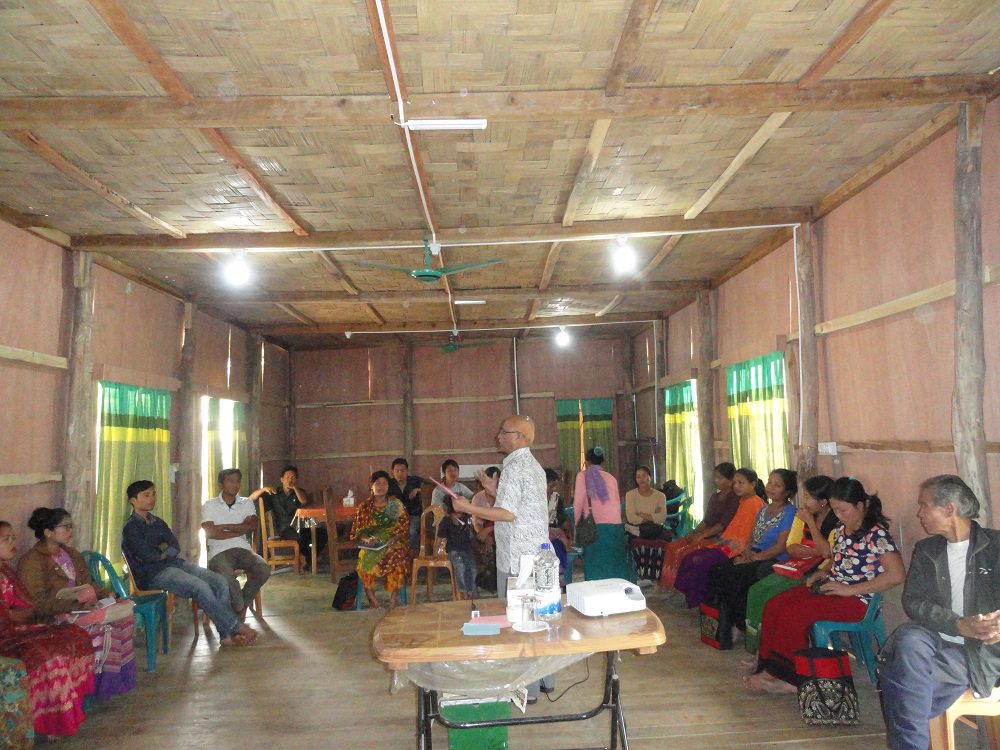 Between 19 and 16 February 2018 at the Zomi Resort in Ruma, ICIMOD and SAPLING jointly held a training for 20 lead farmers, 16 of them women, from four pilot paras of Himalica and SAPLING: Bethel, Eden, Lairumpi, and Name of Ruma upazila. Women in particular were encouraged to participate in the training. Accommodations were made for women to bring their children to the venue, which then helped to facilitate the higher rate of participation among women.

The training was facilitated by Uma Partap from ICIMOD and Md. Abdul Alim Bhuiyan, an experienced trainer and beekeeper and a successful honey trader from Dhaka.

The training was conducted through a variety of methods, including lectures, PowerPoint presentations, videos, group discussions, hands-on demonstrations, and storytelling.

The following topics were covered:

As part of the training, the participants visited the apiary of Zing Bawm, a local beekeeper in Munlai para, where they observed the symptoms of swarming in the colony, the presence of drone brood, queen cells, and division of the colony. They interacted with Zing and were surprised to learn that he had started beekeeping barely two months earlier after being trained by ICIMOD and BHDC.

Following the training, participants received certificates of participation and beekeeping equipment, including a beehive, a bee veil, swarm bag, and queen gate.

Participants thanked SAPLING/HKI and ICIMOD for conducting the training and expressed their commitment to start beekeeping immediately by capturing bee swarms during the upcoming swarming season.

The beekeeping training has been consistently successful. It has inspired participants to take up beekeeping and start beekeeping enterprises to improve their own livelihoods and those of other local famers in Bandarban and beyond.

Every year, monsoon precipitation results in floods of various magnitudes inundating large areas of the Ganges, Brahmaputra, and Indus basins ...

Recovery and Resilience in Nepal