HI-AWARE scoping study in the Teesta and Gandaki basins 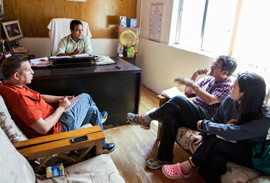 A HI-AWARE team, together
with local partners, undertook field visits to the Teesta and Gandaki basins in Nepal and India in the first quarter of 2015 to identify potential
study sites as well as the major issues playing out in those sites. They visited parts of Sikkim, West Bengal and West Champaran District in Bihar, India and parts of Nuwakot and Chitwan districts in Nepal.

The HI-AWARE team visited Lachen in Sikkim where they met with the members of the Dzumsa (traditional self-governance institution) at the leader’s (Pipon’s) house to discuss climate change impacts and other developments in the region. Two main issues came up: the decline in animal husbandry (mainly yak and sheep farming) in Thangu and Gurudongmar areas and the rise of road tourism. About 34 lodges and 2 homestays have emerged in Lachen and 5 lodges in Thangu in the last decade alone.

The team then visited Pendam in East Sikkim, where the main issues flagged were growing water scarcity, the shift from traditional to modern farming and associated challenges, and the implications of the rise in temperatures observed in the village. In Melli Dara, South Sikkim, the team learnt of the work of the Dhara Vikas Programme in reviving spring water, which holds promise for other HI-AWARE sites suffering from water scarcity (such as Pendam, Uttarey, and the Teesta river valley).  In Gumba Dara in Uttarey in West Sikkim, the main issues discussed were water scarcity, human-wildlife conflict, the growing interest in the Seramna cardamom farming, and dairy development.

In Poshyor in West Bengal, the team learnt of the displacement of 21 families due to a landslide at 3-Mile (Lower Poshyor) in August 2014 and the local government’s response. Hima Lepcha of Middle Poshyor opined that “because of hydropower development on the Teesta river, Poshyor has become even more prone to landslides and land subsidence”. The team visited the Teesta Valley Tea Garden to interview key informants from Upper Kumzot and Danda Pari, focusing on their dependence on tea plantations, water scarcity, wildlife-human conflict, and outmigration.

In Jalpaiguri, which lies in the flood plains of the Teesta river, the team encountered a number of issues. First, there has been a decline in aquatic resources, including riverine fish species such as the bordi and trout, due to the construction of dams upstream. This has had an adverse impact on the livelihoods of traditional fishing communities. Second, the ‘char lands’, which are small islands formed in the river by silt deposits, are under threat from erosion and floods. A significant number of people who live on the chars and rely on their fertile agricultural land for their livelihoods are extremely vulnerable. Char lands are fertile, but, due to the constant shifting of the landscape, land tenure is not properly defined. Local people displaced from the char lands work as wage labourers in the cities, while Bangladeshi migrants have slowly taken over and make a good income due to their knowledge of how to survive in such areas. Third, the Teesta river used to be a mighty river with a natural water flow. However, over the years, the construction of dams upstream has affected the river ecology and there is now less water-flow in the Teesta.

The team conducted informal and key-informant interviews, as well as focus group discussions with stakeholders, in Khadga Bhanjyan, Charghare, Ratmate, Madanpur, Suryamati, Belkot, Kalyanpur, Chaughada, and Bidur in Nuwakot district, Nepal, to assess biophysical and socioeconomic drivers of vulnerability to climate change, such as poverty, unemployment, outmigration, gender inequality, inaccessibility, remoteness, and inequitable development. The team identified major issues such as the labour migration of Nepali youth to Gulf countries and elsewhere; rain-induced landslides; river bank erosion and seasonal floods; water scarcity; and the poor management of drinking water and irrigation systems. Although initiatives have been taken by the government to address some of these issues, they have been largely inadequate. Subsistence farming is the norm on about 40% of the rainfed agricultural land in Nuwakot. The rising inter-annual variability in seasonal rainfall has severely reduced agricultural productivity, making farming households that are dependent on rainfed agriculture even more vulnerable.  Elsewhere, a shift to cash crops, such as off-season vegetables and potatoes, has taken place due to increased access to markets.

Practical Action-Nepal, a local partner of the HI-AWARE Initiative, helped facilitate the field visit of the research team to Chitwan district in Nepal. The team met with the Chitwan District Development Committee to learn about the critical and emerging water-related issues facing Chitwan district. The team identified potential study sites, including Mangalpur, Gunjanagar, Meghauli, and Ayodhyapuri. The team identified three critical issues for further in-depth research: flood risks, human-wildlife conflict, and unemployment. The people the team met with are hopeful that the government and development partners will help build infrastructure to control floods and river bank erosion during the monsoon. The lack of incentives to engage in modern agriculture and adopt new livelihood options means that many are unemployed and, despite the risks involved, migrating abroad for work.

In Rakhahi, Badki Rakhahi, Mangalpur, Bikhna Thori, and Buddha Nagar villages in West Champaran, Bihar, the team learnt that transboundary floods, river encroachment due to the changing of the river course, and river bank erosion are major issues that the people have been grappling with for years. Housing, sanitation, transportation, and health issues in the aftermath of flood disasters are other concerns for those affected. To protect people from floods, the Bihar government has invested heavily in building embankments. In 1954, when the Bihar Flood Policy was first introduced, Bihar had approximately 160 km of embankments and an estimated 2.5 million hectares of land were flood-prone. Since then, 3,465 km of embankments has been constructed and is administered by the Water Resources Department. The Koshi and Gandaki are two rivers on which the construction of embankments has been controversial. The embankments impound water in those fields that are on the river’s side and do not allow the free flow of water, which previously was able to spread thinly. When the precipitation is high upstream in Nepal, the water breaches the embankment leading to floods. Floods keep people in a spiral of poverty and increase migration to other states, such as Punjab, Haryana, and Kerala. 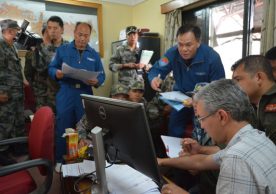 Within hours after the earthquake struck Nepal on 25 April 2015, help from overseas started arriving at Kathmandu airport. Soon ... 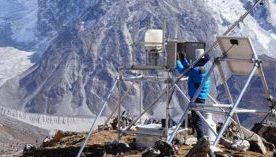 Reviving the Science in Langtang Valley

A small team of ICIMOD researchers recently returned to earthquake-ravaged Langtang Valley to rebuild and maintain the network of hydrological ...

The workshop involved 30 participants (including 10 women) from government bodies, academia, I/NGOs, the private sector, and communities ...