A five-day regional hands-on training on community-based flood early warning system (CB-FEWS) was organized in Kathmandu, Nepal, from 8-12 June 2015. A total of 16 participants from collaborating partner institutions in Afghanistan, India, and Nepal attended the training.

Participants visited the prototype site at the ICIMOD Knowledge Park in Godavari, where research and development is going on to enhance features in the early warning system. During practical sessions in the field, participants dealt with disassembling and refabricating the early warning system prototypes, calibration, testing, and monitoring of the instruments. In fault finding exercises in-field, participants tackled issues in rectification, maintenance, and replacement of parts.

In a field visit to Kodhku Khola, near Harisidhi village, participants reenacted installation of the system in a real world scenario. This further helped in identifying appropriate spots for sensor installation, proper orientation of the wireless antennas, and the optimum range for the wireless system to work seamlessly.

Having worked with an earlier system in the Singara River and Jiadhal River in Assam, Masfiq Alam Hazarika from Aaranyak, India, said he was happy to see new features incorporated in the system.

Raj Kumar Mahato from Sarpallo VDC in the Koshi basin in Nepal and Dev Jit Gogoi of District Disaster Management Authority, Dhemaji, India, said they were apprehensive of the system in the beginning, but having experienced firsthand on how to install it, they were confident that they could teach the villagers back home on how to use it.

Imomberdi Berdov of Focus Humanitarian Assistance-Afghanistan said they were proud to have partnered with ICIMOD for an early warning system in their province back home.

The training was organized by ICIMOD with technical assistance from Sustainable Eco Engineering, supported by the Governments of Norway and Sweden in India (Himalayan Climate Change Adaptation Programme) and the Australian Government through the Sustainable Development Investment Portfolio for South Asia in Nepal (Koshi Basin Programme). This project is also supported in Afghanistan by ICIMOD’s core funding.

ICIMOD has piloted CB-FEWS with Aaranyak, India, and Sustainable Eco Engineering, Nepal, under the Himalayan Climate Change Adaptation Programme (HICAP) in the catchments of two rivers — the Jiadhal River in Dhemaji District and the Singora River in Lakhimpur District — in the Eastern Brahmaputra River Basin. Every year during rainy season, floods in these rivers cause human casualties and destroy public infrastructure (roads, railways) and private property (crops, agricultural land, fisheries, houses, livestock).

Building on past experiences, a CB-FEWS is being implemented in Ratu River in Mahottari District in the Koshi river basin under the Koshi Basin Programme and another system is being considered in Baghlan province in Afghanistan. 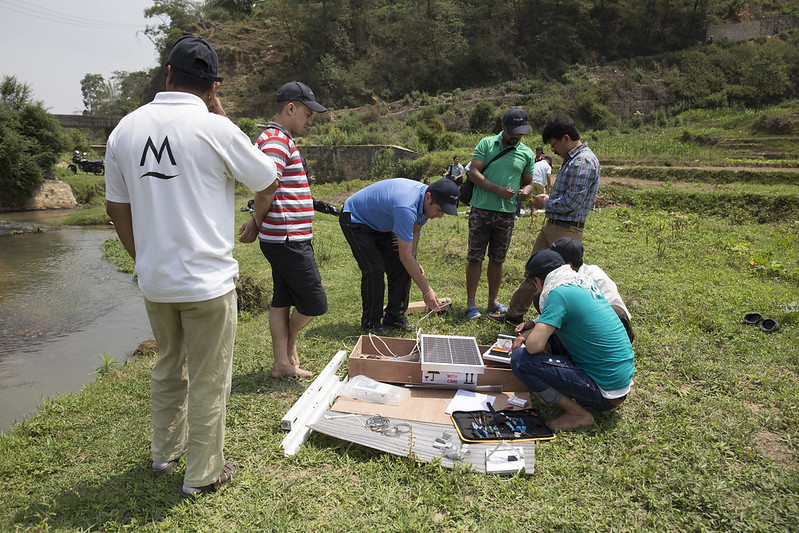 ICIMOD is pleased to announce the four winners of the ICT for Mountain Development Award 2014. They are Avinash Jha ...

ICIMOD Delegates Share Experiences and Lessons from Himalica in Myanmar

Key results, experiences, and lessons learnt from the European Union-funded Support to Rural Livelihoods and Climate Change Adaptation in the ...

Demystifying Hydrogeology at the 43rd IAH Congress, in Montpellier, France

Water is a primary life-giving resource, and its availability is an essential component in socioeconomic development and poverty reduction .The ...