Climate change has altered the frequency and intensity of extreme events and increased the vulnerability of communities to disasters like floods. An assessment by the UN in 2019 showed that floods have resulted in significant loss of life and property. As the annual statement of the World Meteorological Organization (WMO) on the State of the Global Climate for 2019 noted, “Over 2200 lives were reported to have been lost in various flooding episodes in India, Nepal, Bangladesh and Myanmar during the season.” The impacts can already be felt in the region’s rivers, in water quality and water availability, which will together have profound impacts on associated sectors like infrastructure, agriculture, and energy production, and on ecosystems and human health.

Extreme events such as droughts, floods, and other climate-related disasters have resulted in added risks for women and forced them to bear a disproportionate burden of disasters. Bangladesh, India, and Nepal have a high proportion of women in the agricultural sector, with approximately 60% of the women work force engaged in agriculture, mainly in rice production and poultry rearing (FAO, 2010a). Under a five-year multi-country[1] project, Transboundary Rivers of South Asia (TROSA), Oxfam in Nepal and ICIMOD have been working to understand the dynamics that affect vulnerable river basin communities. TROSA has centred its water and river basin work on the rights of remote rural communities, many of them indigenous or ethnic minorities. These targeted communities have strong connections with and reliance on rivers and their floodplains and watersheds for their livelihoods. This work principally focuses on supporting rural river communities to remain connected to, and in control of, their lands, waters, and resources. The work is focused on the districts of Kanchanpur, Dadeldhura, Baitadi, and Darchula in the Sudurpaschim Province.

A study conducted by Oxfam in Nepal with technical support from Practical Action Consulting to understand the feasibility of early warning systems (EWSs) in the Mahakali River basin showed that people living along the tributaries are more vulnerable to recurrent disasters. Disasters like flash floods, which are being intensified by climate variability and change, have a greater impact on riverine communities, especially on women, living along the tributaries of the Mahakali River.

The Government of Nepal has prioritized disaster preparedness along the Mahakali River by investing in flood EWSs. The federal restructuring and decentralization has also led to the devolution of power to local governments for the management of tributaries, delegating the major responsibility of disaster risk reduction to local governments.

Among the eight major tributaries of the Mahakali River, the Rangoon was chosen as the site for a Community Based Early Flood Warning System (CBFEWS). This followed a feasibility study and technical assessment carried out by ICIMOD with its partner Sustainable Eco Engineering (SEE) in consultation with Department of Hydrology and Meteorology (DHM) and Parashuram Municipality. ICIMOD has worked with other riverine communities in the Hindu Kush Himalayan region on CBFEWS. It was awarded the 2014 UN Lighthouse Award for piloting CBFEWS in Assam, which it shared with Aaranyak. ICIMOD’s continued involvement has also led to CBFEWS being installed in other river basins in Nepal, Pakistan, and Afghanistan.

A local partner of Oxfam, the Rural Women’s Development and Unity Center (RUWDUC) has also extended support in site survey and assessment. The feasibility study of the EWS in the Mahakali basin has revealed that there are huge gaps in institutional capacity of local governments. It also shows that women have limited control over resources, making them susceptible to disasters and other climate hazards.

An intervention like the CBFEWS needs sustained support from the community so that it can continue to function in all conditions. For this, the flood-affected stakeholders, especially women, need to have ownership of the dialogue and decision-making process. “As the climate changes, river systems change too. The threat of floods is significantly increasing across the Hindu Kush Himalayan region, and preparedness is becoming critical. ICIMOD’s experience with CBFEWS has shown that communities lie at the heart of preparedness, and within communities’ women have a crucial role. Without including women in these interventions, early warning systems will not be sustainable,” says David Molden, Director General, ICIMOD.

Oxfam has established Women Empowerment Centres (WEC) to support women’s leadership in decision-making processes and in policy dialogues around transboundary water governance through regular meetings and advocacy. In previous interactions, women in the WECs have talked about their rights and responsibilities for disaster preparedness. Women also lobbied with local governments to develop EWSs along the Rangoon. “Oxfam keeps women at the heart of everything we do. We are committed to ensuring women’s rights over riverine resources and amplifying women’s profile and their influence in dialogues and decision making on water management,” says Sarah Blin, Country Director, Oxfam in Nepal.

Early warning information received by women has also helped them to be better prepared for floods while crossing the Rangoon tributary for daily livelihood activities. This joint initiative of Oxfam in Nepal and ICIMOD has shown that better preparedness at the community level can help minimize damages and save lives of riverine communities, especially women, as demonstrated during the July 2018 flood. This experience has highlighted the importance of considering the differentiated impacts of climate change in disaster risk reduction and resilience building. The challenge now is to scale these EWSs to other vulnerable communities living along flood prone rivers and tributaries and to empower the women in these communities to lead the disaster risk assessment and response. 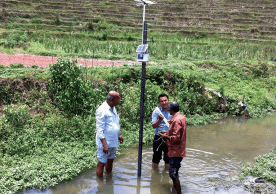 In Search of More Time

Benchmark glaciers for monitoring in Afghanistan and Pakistan 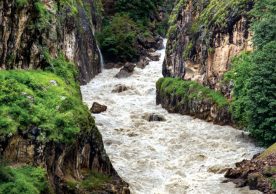 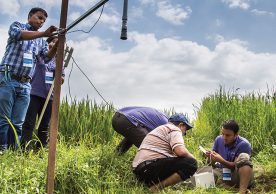 Local governments in Nepal are coordinating and investing in disaster preparedness