A three-day national-level orientation for local governments on “Climate Resilient Villages in Nepal” held in Kathmandu and Kavre 29-31 August ended today. Executive officers of local governments were oriented to the concept of the Climate Resilient Village (CRV), potential solutions and good practices for replication, and ways to operationalize the CRV approach in a gender and socially inclusive manner.

Earlier, at the inaugural session of the orientation workshop, David Molden, Director General of the International Centre for Integrated Mountain Development (ICIMOD), and Jhalak Ram Adhikari, Director General of the Department of Environment signed a Letter of Intent (LoI) to collaborate in support of the Government of Nepal’s Climate Smart Village (CSV) Programme. Molden clarified that ICIMOD’s role would be to provide knowledge and technical backstopping to the Government of Nepal as it expands its CSV programme to 41 largely rural municipalities across the country.

Speaking at the inaugural session, Chief Guest Shakti Bahadur Basnet, Honourable Minister for Forests and Environment, underscored the need to blend traditional/indigenous knowledge with modern scientific knowledge to better address the adverse impacts of climate change and other changes on forests and the environment as well as to improve people’s livelihoods. He said the Nepal Government’s CSV programme offers a perfect opportunity to institutionalize climate change adaptation and resilience building linked to people’s livelihoods at the local level, which he reiterated is both necessary and important. He also suggested prioritizing climate resilient value chain development with market linkages, going forward.

Jhalak Ram Adhikari, Director General of the Department of Environment, noted that building the socio-ecological resilience of vulnerable communities is at the heart of the government’s CSV programme. He called the programme a “homegrown effort”, aimed at optimum utilization of local resources to address the challenges and opportunities posed by climate and other changes to build the resilience of vulnerable communities.

Nand Kishor Agrawal, Programme Coordinator of the Resilient Mountain Solutions (RMS) initiative at ICIMOD, noted that ICIMOD has over ten years of experience in piloting and implementing some 80 simple, low cost, and replicable resilient mountain solutions across the Hindu Kush Himalaya. He added that ICIMOD’s RMS initiative would also implement the CRV concept in at least one village in each province in the process of supporting the Government of Nepal.

The 40-plus participants– comprising mostly of executive officers from local governments and farmers –visited the ICIMOD Knowledge Park at Godavari to learn about green solutions related to better soil, water and vegetation management, income generation, and renewable energy use. They visited three of the resilient mountain villages piloted by ICIMOD and its partners in Kavre – Rabi Opi, Baluwa and Kalche Besi – to better understand the social/institutional processes involved in making the climate resilient village concept work on the ground as well as lessons for uptake through interaction with beneficiaries and stakeholders.

The orientation covered topics such as the framework for understanding socio-ecological resilience in relation to future climate scenarios in Nepal and the government’s operational guidelines for the CSV programme. They also identified potential sites that could serve as CSV hub for each province as well as key technological-social interventions for uptake.

[caption id="attachment_7161" align="aligncenter" width="560"] Participants of the regional conference pose for a group ... 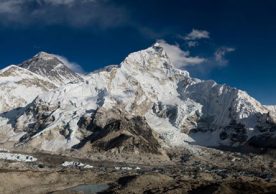 Regional knowledge centre nominates Secretary of MOCHTA as Board Chair