Freshwater ecosystems such as lakes, rivers, streams, springs, and wetlands provide various direct and indirect services. They are a critical source of water for domestic use and irrigation, support biodiversity, and have important cultural values to surrounding communities. Globally, freshwater ecosystems are becoming increasingly exposed to the risk of degradation by development activities, increased demand for their services, and climate change. Stakes are higher for developing countries such as Nepal that need to consider both the long-term and short-term socioeconomic wellbeing of their citizens.

Development activities, particularly hydropower projects, have become a viable economic base, but hydropower development contributes to the alteration of the flow regime of river and streams, resulting in the degradation of ecosystems and causing biodiversity loss. There is a need to strike a balance between the pursuit of economic growth and the conservation of healthy freshwater ecosystems.

However, things are changing for better with the Government of Nepal’s recent endorsement of a hydropower environmental impact assessment manual as a guiding document for EIAs, in line with international good business practices in the hydropower sector.

Jwala Shrestha, Under Secretary (Tech.) of Botany at the Ministry of Forests and Environment, says that such steps are being taken to make EIAs concerning freshwater ecosystems more holistic. “The impact of hydropower projects on aquatic species such as fish and their migration trends was not included in previous EIAs. The new manual and national EIA guideline has addressed these issues and considers freshwater ecosystems as an important component of the EIA process,” said Shrestha.

Hydropower development in Nepal follows a blanket 10% of the minimum mean monthly discharge as environmental flow, irrespective of geographical features and biodiversity of the rivers. This makes it challenging to ascertain the sustainability of freshwater ecosystems. Moreover, the lack of training on holistic EIAs for environmental officers in different government agencies, limited research and data on freshwater ecosystems, and the absence of a standard methodology to carry out assessments pose challenges.

Given all the challenges facing this development–conservation issue, a four-day training on assessing freshwater ecosystems for sustainable hydropower development in Nepal was organized from 19 to 22 November 2019 in Dhulikhel. The training was organized by the Forest Research and Training Centre – Ministry of Forest and Environment, ICIMOD, Kathmandu University (KU), the Norwegian Water Resources and Energy Directorate (NVE), and the International Finance Corporation (IFC).

With a particular focus on EIAs, the training targeted stakeholders in the hydropower sector and environmental officers. Training sessions covered overview of EIA procedures and assessment of freshwater ecosystems for sustainable hydropower development in Nepal. Participants were able to test run the lessons from the training during a hands-on exercise on tools and procedures for collecting and analysing data on water quality and aquatic life.

There was a general consensus among training attendees about the need to improve understanding on the importance of freshwater ecosystems during the EIA report review and approval process. They opined that similar trainings could be organized for a wider range of stakeholders in the future. This was echoed in the closing remarks by Lila Mani Paudyal, former Chief Secretary and Ambassador to China: “The sustainable use of resources can bring sustainable prosperity. We need a sector-specific EIA formation and assessment that is more effective than the current general EIA format. Future multi-stakeholder trainings linking theory to practice should be prioritized for implementing knowledge at the ground level.”

Farmers Learn Beekeeping in Pilot Villages in Bhutan and Nepal

More than one-third of households have two to ten colonies of bees in traditional fixed-comb log-comb, wall-comb, or pitcher hives ... 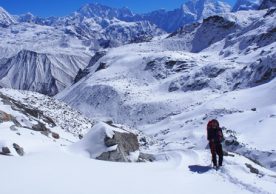 How wet is the snow?

He pulled the string of the generator one more time, It did not move an inch. Not only was the ... 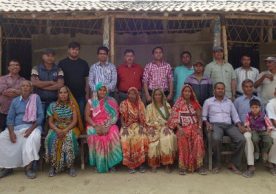