The monsoon rain that fell incessantly from 11 to 14 August inundated Biratnagar, the industrial capital of Nepal. The city’s airport, the second largest in Nepal, remained submerged for over a week. The runway sat under four feet of water and the terminal building was engulfed in several feet of standing water, its ground floor completely submerged. The airport remained closed as the Terai plains grappled with death and loss, many of its people without food and shelter, and vulnerable to disease and infection. The facility’s lack of preparedness in dealing with the disaster reflected a general lack of preparedness. According to the Ministry of Home Affairs, 160 people died, 29 went missing, and thousands were affected by the flood. The Ministry of Agriculture and Development has estimated that the flooding damaged planted crops worth an estimated NPR 8.1 billion. An evaluation of these numbers raises three important questions: How did the flood become such a big disaster? What level of preparedness did we have? What could we have done better?

This year’s heavy rain was a result of the monsoon trough. The monsoon trough is an elongated area of low pressure that formed parallel to the foothills of the Himalaya. This low-pressure system dropped significant rain south of the Churia range this year, inundating hundreds of villages. The Meteorological Forecasting Division of the Department of Hydrology and Meteorology (DHM) recorded high rainfall exceeding 200 mm in 24 hours in many places. On 12 August, Simara received 227mm of rain and on 13 August, Bhairahawa received 222 mm. The Terai region of Nepal and areas further downstream in the Indian state of Bihar were most affected by the resultant flooding.

Timely flood preparedness is key to saving lives and property. In the last decade, Nepal has made significant progress in disaster management. The country has strengthened its institutional arrangements for disaster risk reduction and created national multi-stakeholder platforms. Nepal has been an active contributor to the Hyogo Framework for Action 2005–2015: Building the Resilience of Nations and Communities to Disasters, which emphasizes the implementation of early warning systems (EWS). The country has committed to the Sendai Disaster Risk Reduction Framework 2015–2030, which aims to substantially increase the availability of and access to EWS and disaster risk information and assessments to people by 2030. An EWS, as defined by the United Nations International Strategy for Disaster Reduction is an “integrated system of hazard monitoring, forecasting, and prediction and disaster risk assessment, communication and preparedness activities, systems, and processes that enable individuals, communities, governments, businesses, and others to take timely action to reduce disaster risks in advance of hazardous events”.

Organizations such as Practical Action, Mercy Corps, Lutheran World Relief, and the International Centre for Integrated Mountain Development (ICIMOD) in collaboration with DHM have established flood EWS in several parts of Nepal. The success of these systems depends on four crucial pillars. The first is disaster risk knowledge based on the systematic collection of data and disaster risk assessments. The second involves detection, monitoring, analysis, and forecasting of the hazards and possible consequences. The third pillar is dissemination and communication by an official source of authoritative, timely, accurate, and actionable warnings and associated information on likelihood and impact. The fourth, preparedness at all levels to respond to the warnings received. A weakness or failure in any one part could result in failure of the whole system.

Disaster risk reduction measures: What worked and what did not

On a macro scale, it does seem that the first three pillars have been effectively established and were efficiently executed during the recent flooding. The EWS in the Babai River Basin, for instance, allowed people adequate time to move to safer ground before the swollen river engulfed their homes this August. Whereas flooding in the same river had caused 33 deaths in 2014, five deaths have been recorded in 2017. In the Ratu River Basin as well, timely early warning to people downstream and across the border in India saved countless lives.

The flood forecasting section of the DHM monitored all floods through real-time hydrometeorological stations and provided timely advisories through special bulletins and its 24/7 Flood Advisory Service initiated in 2016. These advisories were issued to key organizations and individuals involved in disaster risk reduction, including the National Emergency Operating Centre (NEOC), Ministry of Home Affairs. The advisories provided information on rainfall estimates for the first 24 hours since their issuing, weather forecasts, updates on the situation of major rivers, flood forecasts, and advisories to the public. As soon as river water levels reached the alert stage, DHM, in cooperation with Nepal Telecom and Ncell, broadcast alerts by sending out SMSs to all of their subscribers within the hazard zone. Such large-scale alerting through more than 600,000 SMSs probably saved many lives.

Nevertheless, the truth remains that the floods did manage to take 160 lives. Why did this happen? Was the early warning provided by DHM understood by the disaster management authorities at the district level and was it communicated in simple forms? It is possible that the dissemination failed to reach every member of the population or that every person receiving the alert was not in a position to react effectively and in time, or that the magnitude of the floods was unprecedented and that people simply didn’t heed to the alerts? These challenges are also related to the fact that it is still very difficult to determine risk and identify potential consequences and impact (the technical elements of the three pillars) at the village or community level. What can be improved to reduce the loss of lives, if not prevent such loss entirely?

What can be improved?

On 18 August, a national newspaper in Nepal carried a story of a bike rider killed by the floods. What was intriguing about the story was that the man had known that the area that he and his brother were riding their bike in was about to be flooded. The two brothers had even alerted their families about the impending flood but despite increasing water levels had taken the risk of riding their motorcycle. Around the same time, a TV report on an Indian channel showed three people washed away by floodwaters while crossing a road that was rapidly getting eroded by the flood even as they attempted to cross. These are just two instances where communities neglected early warnings or even behaved illogically and paid the price for it with their lives. These examples illustrate the lack of preparedness at the local level.

This calls for attention towards developing a culture of better preparedness at the local level. First, information has to reach the concerned people through a proper institutional mechanism. But this, by itself, is not adequate. It is necessary to make the community understand the implications of the warnings being provided and identify safe evacuation routes and locations for them to move to. The communities concerned should also accept the warnings given and must be trained to take appropriate action. Unfortunately, even the most advanced science cannot accurately predict the actual magnitude of floods and what impact they will have at the local level. Communities must be trained to anticipate deviations but exercise preparedness. A holistic change in attitude and behaviour needs to evolve so that they may be able to take timely action and evacuate.

Preparedness must be considered with future possibilities in mind. The key question the government needs to ask is when and not whether a potentially large flood will strike again. The availability of and access to EWS and disaster risk information and assessments needs to be increased so that EWS are accessible to all users.

While continuing to improve flood forecasting skills and capabilities at the central level, the country needs to strengthen its disaster management systems—at the central, district and local levels—for improved understanding of disaster risk and management. There is need to strengthen institutional mechanisms for risk communication and the capacities of various district line agencies and local communities. It is also important to raise awareness so that timely action is taken to avoid loss of life. Bringing in expertise from the private sector and strengthening public and private investments in disaster preparedness can also help build safe, resilient communities.

It is time for stakeholders from all sectors to take this disaster as a strong reminder of the potential fury of floods and take it as a window of opportunity to get their act together and plan for sustainable and scientific development that is disaster resilient.

Biodiversity and sustainable tourism in the Hindu Kush Himalaya 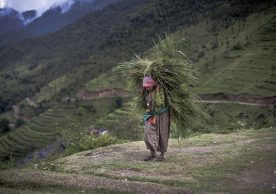 Understanding Resilience: An Outlook on the External and Internal Challenges faced by Mountain People