Farmers in Kavre reaping the benefits of soil cement tanks

Farmers in Kavre, Nepal, have started using soil cement tanks to store water, which they use to irrigate their lands through drip and micro-sprinkler irrigation. They have also observed improvements to the soil quality since soil moisture is retained even during dry periods. (Photo: Jitendra Raj Bajracharya/ICIMOD)

Apsara Adhikari grows maize and mustard in her small plot of land in Kavre, southeast of Kathmandu, Nepal. Like most other farmers in the district, she typically limits her selection of crops, which sustain her family for much of the year and generate a modest income. But last year, her yield almost doubled, and she grew a wider variety of crops (cucumber, cabbage, bitter gourd, cauliflower, tomato) throughout the year. This could be attributed to a host of factors – from improved agricultural inputs to erratic climate conditions. But Adhikari points to soil cement tanks as the game changer.

A soil-cement tank is a semi-permanent structure constructed by mixing red soil, sand, and cement. They store water, which can then be efficiently distributed during the dry season using low-cost drip irrigation and micro-sprinklers. This allows for improved year-round irrigation, which naturally opens up production possibilities, from off-season vegetables to high-value horticultural crops (vegetables, fruits, and spices).

Dependence on rain-fed agriculture across the HKH

Rain-fed agriculture covers 80% of the world’s cultivated land, delivering much of the food consumed globally but this also means that food production in these tracts of land is vulnerable to the vagaries of rainfall patterns. This is true also within our Hindu Kush Himalayan (HKH) region, where only 35% of mountain agriculture in the region is irrigated. In Nepal’s mid-hills (where Kavre lies) and mountains, vast farmlands are left fallow during the dry season (December–May) because irrigation facilities are inadequate or non-existent. This hits poor mountain communities with small landholdings hardest, as their food baskets rely heavily on rain-fed agriculture.

Soil cement tanks are a cost-effective, sustainable option for smallholder mountain farmers to manage the unpredictability of rain-fed agriculture. Rainwater runoff, upland springs and taps, and household wastewater can be diverted, stored in these tanks, and efficiently used for irrigation. 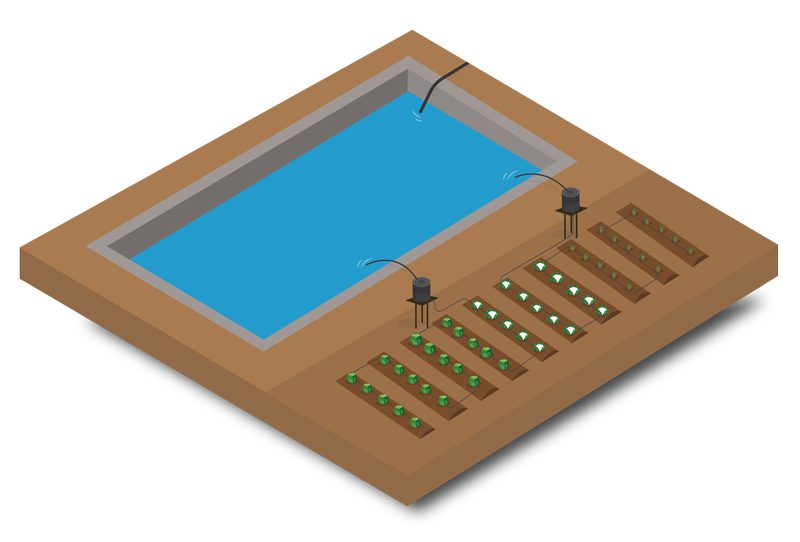 Integration with water-smart technologies: Plastic and straw mulching and drip and micro-sprinkler irrigation; can be used for fishery

Soil cement tanks are not a revolutionary technology. There are numerous water storage structures – such as water collection ponds and plastic-lined ponds – that serve a similar purpose. In fact, plastic-lined ponds are more common in the mid-hills of Nepal and across the HKH. But soil cement tanks are more cost-effective, reliable, and durable. They do require a large initial investment and need to be regularly cleaned to avoid insect infestation, but annual maintenance is quite simple and very affordable. They can also be repurposed for fishery.

Recognizing the potential of this technology, we partnered with CEAPRED in 2016 to pilot these tanks in Namobuddha Municipality, Kavre, Nepal. Eighteen smallholder farmers, Apsara Adhikari among them, constructed this tank for their farmlands at a subsidized rate (bearing around 15% of the cost), while six farmers adopted this technology independently. Most have set up tanks that can store around 24,000 l of water.

Please read this illustrated flyer for a detailed look into soil cement tanks and their construction, costs, and use.

In 2019, we interviewed five farmers (three men and two women, including Apsara Adhikari) from Kavre who have been using soil-cement tanks. We wanted to understand whether the tanks had improved agricultural productivity and increased incomes.

The farmers spoke very positively of the efficacy of the tanks. They have innovatively integrated several water-smart technologies into the tanks, such as plastic and straw mulching and drip and micro-sprinkler irrigation. A single tank holds enough water to irrigate 2–3 ropani of land (1 ropani = 508 m2) for an entire season. Being able to irrigate crops during dry seasons has doubled production for most. And crop diversity has tremendously widened: farmers are now growing more vegetables like cauliflower, cabbage, and tomatoes, which they typically would not have been able to cultivate in their small, rain-fed lands. This improved production and greater diversity of crops provides greater dietary diversity for household consumption and has also doubled most farmers’ income. The farmers have also observed improvements to the soil quality since year-round irrigation allows soil moisture to be retained even during dry periods.

Moreover, having a durable water storage facility also appears to be a gender-responsive solution: the drudgery of transporting water to irrigate fields during dry seasons, which is generally undertaken by women and children, is also alleviated. Apsara Adhikari also attested to that when she spoke to us. When properly sited and placed on an elevated space, the irrigation is gravity fed and needs no additional source of energy. Easy and affordable maintenance (only around USD 17 annually) also frees up time for other productive work.

“We found this technology more efficient than plastic-lined ponds, which are easily damaged by rats. Our soil cement tank has helped us irrigate our land even during dry months. We are very happy that it has doubled our farm production and income.”
-Apsara Adhikari, farmer, Namobuddha Municipality, Kavre (Photo: Sanjeev Bhuchar/ICIMOD)

Although cost effective, the fixed cost for this technology is quite high, particularly for smallholder farmers. To lessen this financial burden, local governments can provide subsidies to women and marginalized groups interested in this technology. Self-help groups with a revolving grants system would help expand the use of these tanks and ensure sustained use across Kavre and the region.

Following our initial pilot in Namobuddha Municipality, these tanks have been scaled up in Panchkhal Municipality in Kavre. Altogether, 16 soil cement tanks have been piloted in small farm landholdings in Kavre and Dadeldhura districts to address water scarcity. The uptake has been highly encouraging, with the number of farmers adopting these technologies doubling within a year and a half and more than 80% of women farmers using them. We are also planning to scale out this technology to other parts of Nepal, particularly in the mid-hills, where people depend on rain-fed agriculture. Many more smallholder farmers could reap the benefits of soil cement tanks – much like Apsara. 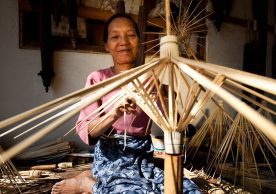