The cold does not bother her anyway 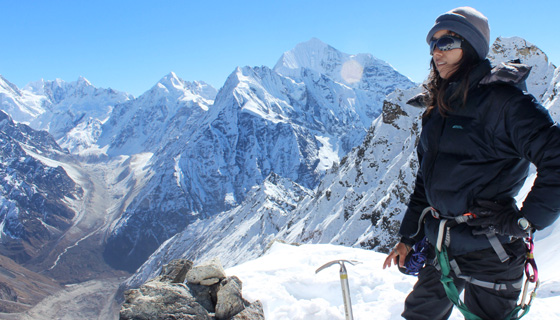 Gunjan Silwal, 29, during a research expedition to Yala glacier

On her desk, Gunjan Silwal is engrossed in her computer, analyzing glacier mass balance data, working on figures and graphs which to the untrained eyes look rather like scribblings on a toddler’s drawing book. But to the trained eyes, these are essential records of how much mass has been added or reduced over the years on Yala glacier. The one she is working on is for the annual mass balance of the glacier from 2014 to 2015.

When Gunjan is finally done with her analysis, she will begin to prepare for yet another field expedition to the glacier. Come April, Gunjan and her peers will head up to Yala glacier to collect spring data, into the alpines and glaciers of the Nepal Himalaya.

Gunjan, 29, joined the International Centre for Integrated Mountain Development (ICIMOD)’s Cryosphere Initiative in 2016 as a research associate. She has spent a substantial amount of her time on the glacier often doing strenuous manual work such as installing and measuring stakes for mass balance monitoring, installing temperature loggers for permafrost studies, and measuring the discharge of glacier meltwater streams to better understand how glaciers in the Nepal Himalaya are responding to global climate change.

“Water is one the main sources of livelihood in Nepal and the HKH. It is empowering to learn about how climate change is impacting our main water reservoir,” she says. Her first time working on a glacier was in 2013, visiting Yala glacier as graduate student for a practical field data collection exercise.

Gunjan Silwal (centre) measuring stake data for glacier mass balance at Yala. Readings on stake measurements help researchers determine whether or not a given year has been a good one for the glacier

History tells us about brave women who overcame barriers created by the ruling socio-political contexts of their time to venture into the field of science. The journey has been a long and arduous one, yet these women paved the way forward for other women to take up professions that were seen as being more suited to men. In Gunjan’s case, her professional requires her to perform extensive fieldwork in high altitudes.

“Before our practical field data collection exercise, Gunjan had never been above 3,000 metres, but that did not deter her from carrying out her task professionally,” says Tika Gurung, Gunjan’s colleague at ICIMOD, and fellow Kathmandu University (KU) alumni. “She is passionate about her work.”

ICIMOD’s contribution to the Cryosphere research in the region

Across the HKH, a vast glacierized expanse, there are only a few glaciologists from the region, and fewer women than men. To address the lack of experts from the region and also encourage gender balance in glacier research, ICIMOD has been playing a crucial role in providing platform for women professionals to foray into hard core science, making a strong case for the idiom “mind over matter”.

The Cryosphere Initiative of ICIMOD has been pioneering research on the impacts of climate change in the HKH alongside building capacity in cryosphere research. A career in glaciology demands physical and mental strength and commitment. This involves hiking up to inaccessible glaciers in remote places, spending weeks in the field well above 5,000 metres to collect data on glacier mass balance, snow, and meteorological and hydrological conditions. What the job requires is a zeal for understanding the process of climate change, and a knack for adventure.

Despite long working hours in high altitudes and exposure to harsh mountain conditions, more women from the region are taking up glaciology.  Graduating in 2015, Gunjan Silwal is one of the 23 young graduates of MS by Research in Glaciology programme, a collaboration between ICIMOD and KU. She is also one of six female students who was supported by the Cryosphere Monitoring Programme (CMP). In 2011, the MS by Research in Glaciology programme KU offers courses on glaciology, general hydrology, meteorology and climate science, Himalayan geology, remote sensing, and GIS. All the 23 young glaciologists of Gunjan’s graduating class are currently either employed or pursuing higher studies.

“The main challenge is in selecting candidates for the course because candidates need to be both academically sound and physically fit. Fieldwork in the high mountains is physically and mentally taxing,” says Associate Professor Rijan Bhakta Kayastha, coordinator of the MS programme.

KU’s MS programme is implemented under the Cryosphere Monitoring Programme (CMP) with funds from the Government of Norway. The programme provides scholarships for students from Nepal. Currently, seven students are enrolled in the programme, four of whom are supported by CMP funding. 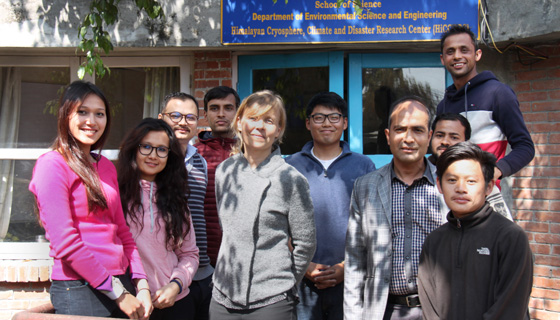 “Our research sites focus on two river basins currently. With increased human resource and experts, we could collaborate with organizations such as ICIMOD to monitor all the 19 glacierized river basins in Nepal” says Kayastha. KU is now working towards supporting more students from other countries in the region.

CMP since its inception in 2013 has supported 93 women in cryosphere related trainings. The Cryosphere Initiative itself has come a long way from having no female researchers to now being led by a woman. The current ratio of female to male glaciologist stands at 5:8. ICIMOD is also working with a large group of international scientists, both men and women but Anna Sinisalo, Programme Coordinator for the Cryosphere Initiative at ICIMOD believes that much can be done to encourage more women scientists, especially from the HKH, to develop careers in this field.

The Initiative continues to make conscious efforts to involve more women in the programme through scholarships, training courses, and by promoting the participation of regional women professionals

“Our goal is to achieve sustainably and scientifically robust long-term monitoring programmes related to the cryosphere to better understand the importance of this resource to mountain communities, downstream populations as well as the global community,” says Sinisalo.

Data measured and processed by Gunjan and her colleagues along with ICIMOD’s partners during and after the annual field expeditions contribute to global glacier mass balance datasets. Gunjan has also used such data for glacio-hydrological modelling of Chamkhar Chu basin, Bhutan, to estimate the contributions of snow and glacier melt water to rivers. The outcome of her work was presented at the American Geophysical Union (AGU) annual meet in December 2016.

“Glaciology in itself is a new science field in this region, and there is still a lot to do in terms of encouraging students to take up this course” says Gunjan.

As a young researcher in glacier science, Gunjan Silwal sees herself working in the field of water security, contributing to long term monitoring and free access to data and supporting evidence based decision making in the region. 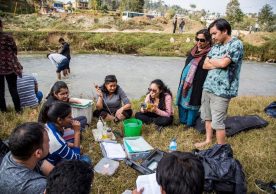 Freshwater ecosystems such as lakes, rivers, streams, springs, and wetlands provide various direct and indirect services. They are a critical ...

Connecting Pixels to People: A case Study of the Gandaki River Basin

Nepal is experiencing a massive out-migration of the youth and labour migration is becoming an important factor in securing an ... 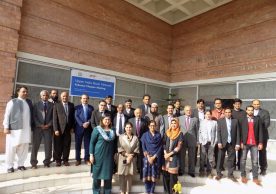