A bumpy ride to Paro

It is not often that one sees a series of lightning bolts across the runway followed by bone-chilling thunder while proceeding to board their flight. The fear escalates with the realization that this flight is from a very wet and windy Tribhuvan International Airport in Kathmandu to Paro Airport in Bhutan, predicted to receive snow as well as rain. To add to my bad luck, the former has often been labelled by some critics as an “awful” airport, and the latter as one of the most challenging in the world! As I anxiously braced myself, I overheard some very reassuring words: “Don’t worry, the plane will shake a little bit. But be brave. You will clear the clouds very quickly”. Unfortunately, they weren’t directed at me; it was a conversation between a clearly supportive couple. Another passenger was on the phone: “Sure honey, I will call you once I land”. I better land, I thought nervously.

I was travelling with colleagues with whom I had not interacted much before to attend a formal institutional training in Bhutan. Such trips are often opportunities to break the ice, and I was looking forward to getting to know them better. But these circumstances threw a wrench into the works. Now I will admit that I have a fear of flying, which intensifies when there is mid-air turbulence. What reason could there possibly be for a five-tonne airborne metal structure to be shaking – we’re not on a road, can’t we avoid the air pockets? I almost never leave my seat while flying, fearing that the minute I get up, the plane will wobble like a bullock cart! And it always does, believe me!

Our takeoff from Kathmandu was quite a special one. After almost 20 minutes of jolting around in the air, during which I must have continuously and loudly prayed to almost all of my Gods for one last opportunity to make a difference in the world, we were finally air borne at a cruising altitude. Now, for moral support, it does help to have a colleague seated next to you who is equally scared, but things are not fun when you see him giggling all along while you are clinging onto your seat handles all the way. It is especially more embarrassing when this story is shared around by him, including explicit details of the prayers over dinner the very same day.

Our flight to Paro promised a splendid view of the Himalayas, in particular of Mount Everest and Kangchenjunga. This was not the case. Thick blankets of rain-laden clouds masked everything – from the hills and mountains to the clear blue sky. What did keep me going was the delicious snack which the airline provided, and the crossword puzzles with my next-seat colleague. He struggled with the longer words, and I with the shorter ones. I wasn’t really sure if he had asked for my help with the puzzle. I didn’t care though – anything to keep my wondering brain occupied.

“Cabin crew, please prepare the plane for landing” – a delight to one’s ears isn’t it? Only ours was, “The weather is Paro is well below the required landing criteria. However, we will make an attempt as soon as we find a window”. A window? Is he serious? How long will this window be open for? What if it closes before we make it through? A thousand thoughts were bouncing inside my head. “Dude, what is this five-letter word?” my neighbour nudged at me – hunched over the crossword puzzle, oblivious to the gravity of the situation. Exactly what one needs when one is tensed beyond limit. A real ice-breaker!

“Why are we climbing? I thought we were going to land?” enquired my neighbor at last. I knew what had just happened. The “window” had shut before we could make it through, and now the pilot was pulling up as fast as possible to clear the approaching hills. “No worries, I am sure he is going to circle around and try again”, I replied. Deep down, I was hoping he wouldn’t as I was well aware about Paro Airport’s notoriety, having been there just a couple of months before.

Ninety highly uneasy minutes later (during which we were kept in the dark about our fate), the pilot made an announcement: “We have been diverted to Bagdogra Airport in India as the visibility is well below the critical limit”. I was secretly relieved! With the dense clouds that almost completely obscured visibility, I was sure that the pilot had made a wise decision.

Landing at Bagdogra brought back really old memories – 23 years old to be precise. I had flown here back in 1996 as a grade six student of St. Paul’s School in Darjeeling. I was 11 years old then, but the memories were as fresh as ever. Of course, the immigration formalities and arranging our travel to the designated hotel for the night were taxing as some of the (relieved) passengers decided to make a run for it, but it was worth the wait. The local delicacies that we sampled for dinner from some very good and some shady restaurants were the perfect ending to our adventurous day. Oh the stories which flow during a meal well earned – but those can wait for my next blog.

Early next morning, we left for Paro and made a very safe landing. I felt that the rapturous, almost sarcastic applause from some of the passengers was uncalled for, because our tribulations of the previous day were not the pilot’s fault after all! He made a wise decision and should be commended instead. I have never been happier ascending down a flight of stairs than I was disembarking from the plane that bright, crisp morning. Paro looked beautiful, and the snowfall the evening before made it mesmerizing. Considering the good company provided by some “supportive” colleagues (who did get to know me, perhaps too well!), a productive training, and with some great anecdotes under my belt, my trip to Paro – however nerve racking – was one to remember!

Rice and Reason: Planning for System Complexity in the Indus Basin 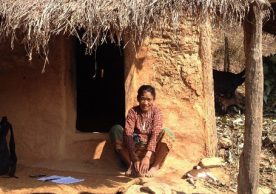 Water Scarcity and Women’s Lives: an Observation from the Field

Recently, while on a research trip studying adaptive water governance under the Himalayan Adaption, Water and Resilience ...

Local farmer to entrepreneur—adapting to change

On the way to Syaphrubesi from Dhunche, we saw a small board advertising “Fresh Rainbow Trout”.  As is what happens ...

ICIMOD supports efforts to integrate the use of geoinformatics into biodiversity conservation in West Bengal, India

Wildlife monitoring and the management of protected areas can benefit tremendously from the use of geospatial tools. With this in ...